Potpourri in the 17th Century
This post is the fourth in a seven-part series, A History of Potpourri. 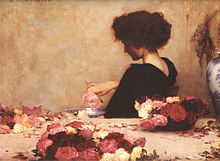 Painting of a woman making potpourri, 1867

We arrive in France. It’s the 17th century and the crafting of potpourri, the “rotten pot,” provides a popular accessory for home decor.  Potpourri-making was a process of layering fresh flowers and herbs with coarse salt which acted as a preservative and drying agent, in covered ceramic vessels.  More flowers, herbs and salt were added to the original mixture throughout Spring and Summer as the garden became more abundant, and were layered and tossed with additional salt.  The result was a not-so-pretty somewhat sweet-scented (and sometimes moldy) mass of grey botanicals.  After the Autumn harvest additional spices and botanicals, like orange peel and cinnamon stick, were added to pretty the mixture up and add more scent, and essential oils or perfumes were added as a final touch to create a long-lasting mixture that would bring beautiful scent to the home.  This fermented blend was then placed in bowls or baskets and set around the abode, whether it be castle or cottage.  Additional fresh flowers, when available, were placed atop the mixture. 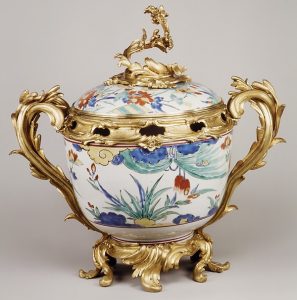 Check back next week for post five, “Potpourri in the Victorian Era, “in the series, “A History of Potpourri.”