This is the second blog post in a seven-part series on the history of potpourri. 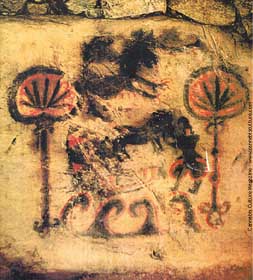 Though the remains of floral bouquets have been found in burial graves along with the bones of prehistoric people, we can only speculate about early Man’s use of preserved flowers and herbs to add or mask scent in caves or primitive structures.  It’s more than likely that prehistoric people had some unpleasant smells lingering around the old cave homestead, from foul-smelling food scraps to unwashed bodies.  Just because their surroundings were austere does not mean that good scents did not appeal to them.  It’s likely that our early ancestors were as attracted to good-smelling things as we are nowadays, especially considering how connected they were to the natural world.

Wild herbs and flowers used for medicinal purposes or for their fascinating beauty were probably brought into the cave, dried naturally on their own in the cave over time, and in their dried state, especially when crushed, were found to release subtle aromas making various areas of the domicile smell great. Maybe our enchantment with herbal and floral fragrances in the home began here.

Check back next week for part three!